Developing a responsive WordPress theme for the student TV station 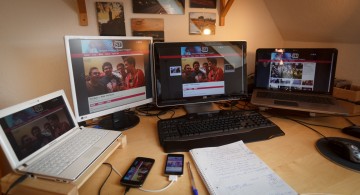 At university, I am heavily involved with student media, in particular the student television station GUST. Last year, I have served as Technical Coordinator on the station’s management team. Previously, I was webmaster (a position I have taken on again on a temporary basis now). I originally re-built the website over the summer of 2011 to practice web-development, learn about WordPress, and of course try to give the station a more modern image.

I have to admit, the design has aged a bit, but I like to think I have learned something from that process (my first foray into WordPress theme development). Back then, I did all the ground work of implementing custom post types (e.g. video episodes) and taxonomies (programmes, tagging crew members), and writing a script to import all content from the previous website.

Fast forward to 2013: This summer, I set out to do it all again. In consultation with the current GUST management team, I came up with a draft design (Photoshop), but quickly moved to HTML/CSS mockups based on the previous template’s html code. I re-used my previous template files, adding to and changing the markup to suit new requirements, but keeping the overall structure.

This time around, I placed a lot of attention on responsive design, something made a lot easier by using the SASS CSS pre-processor. SASS also helped refine the colour scheme, since changes only required editing a single accent colour I then derived other colours from.

What have I learned this time? It is probably worth going through the extra trouble initially to use some form of semantic grid framework. My approach required adding some markup in weird places – which seemed to be fine for the static home page I did the initial design on, but quickly became a mess once I moved to the many different dynamically generated pages.

Now, the next big task will be to hand over the project to a new webmaster who will hopefully be elected at the beginning of term in a few weeks. I am also looking forward to training other members of the GUST team on using WordPress, formatting pages and blog posts, and updating content on the website for years to come. Maybe it is asking too much for the website to survive after my graduation, but one can hope – and make sure the next generation at least knows how to use it.